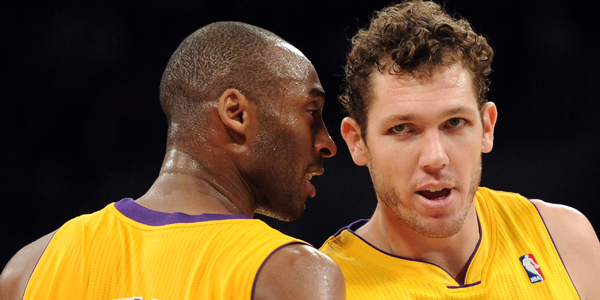 There are so many good Kobe Bryant stories out there, it is rare to come across one that isn’t already known, but this one is exactly that.

Luke Walton, speaking on a podcast interview with Open Run, told the story of how he once showed up at a Lakers practice smelling of alcohol after a night out on the town.

It didn’t take long before Kobe, being the person that he was, noticed, like a shark smelling blood in the water.

Rather than cut him Walton some slack, Kobe went full attack mode, telling everyone that he was going to destroy him in practice. No surprise what happened next.

Here is the story in Walton’s own words:

I remember one time my rookie year, I came in a little, uh, him [Kobe] and Shaq like to do this as, I think it was just rookies, but any young guy, I probably had too much to drink the night before, so I came in, I was a rookie, I felt good, and they could smell some alcohol on me. And Kobe informed the rest of the team that no one was allowed to help me on defense, and that I had to guard him the entire practice.

I was laughing at first like, ‘Oh, this is funny,’ but in Kobe’s mind, in his eyes, it was like, ‘No, I see and smell weakness, I’m going to destroy you today.’ He taught me that lesson. He probably scored 70-something in practice that day, and I was begging for help, none of the teammates would help. But yeah, his killer instinct and his work ethic, they’ll stick with me forever.

Check out the full “Open Run” podcast with Walton here.