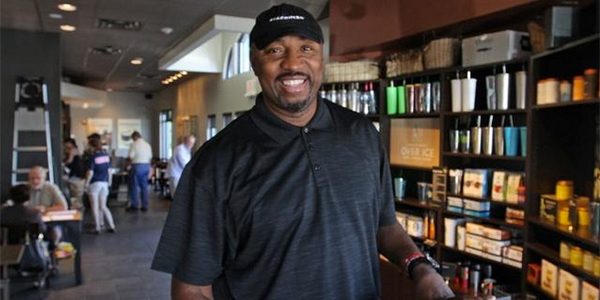 He played in the NBA thirteen years, won an Olympic gold medal in 2000 and as a four-time All-Star, but now Vin Baker is training towards becoming a manager at Starbucks, according to The Providence Journal’s Kevin McNamara.

Having ended his professional basketball career with the LA Clippers after the 2005-06 season, the 6’11” big man has battled alcoholism and financial missteps, ranging from a failed restaurant to simply too many people getting their hands on his money, which have all contributed to wipe out nearly $100 million in earnings.

Baker is now 43, newly married and with four children, and credits CEO Howard Shultz, the former Seattle SuperSonics owner, with the opportunity to get his life back on track with Starbucks.

He’s also a trained minister who works at his father’s church in Connecticut – he’s now been sober four years.

“In this company there are opportunities for everyone. I have an excellent situation here at Starbucks and the people are wonderful,” Baker says.

A lot of basketball fans may view Baker’s life as a sad story and warning to suddenly having a lot of money on your hands, but Baker doesn’t see it that way. At all. He says his story is one of getting back on his feet, of conquering demons and searching for success in this next phase of life.

“When you learn lessons in life, no matter what level you’re at financially, the important part to realize is it could happen,” he said.

“I was an alcoholic, I lost a fortune. I had a great talent and lost it. For the people on the outside looking in, they’re like ‘Wow.’ For me, I’m 43 and I have four kids. I have to pick up the pieces. I’m a father. I’m a minister in my father’s church.

“I have to take the story and show that you can bounce back. If I use my notoriety in the right way, most people will appreciate that this guy is just trying to bounce back in his life.”

Baker was the eighth player picked in the 1993 draft after his starry career as Hartford’s all-time greatest hoopster. He signed a 10-year, $17.5-deal with the Bucks and within two years was an All-Star. He was traded to Seattle in 1997 where he signed a seven-year, $86-million deal.

He also now wants to use his story to provide guidance to the young NBA stars with millions of dollars thrown at them.

“I appreciate that in a lot of cases it’s more money, more problems,” he says. “I think in professional sports today teams have to deal with the personal challenges of giving young men this extraordinary amount of money. For me it was a struggle. I think when you’re giving guys who aren’t even All-Stars $80 million, there should be a framework in place where these kids can talk to someone.

“…For me this could have ended most likely in jail or death. That’s how these stories usually end.

“For me to summon the strength to walk out here and get excited about retail management at Starbucks and try to provide for my family, I feel that’s more heroic than being 6-11 with a fade-away jump shot. I get energy from waking up in the morning and, first of all, not depending on alcohol, and not being embarrassed or ashamed to know I have a family to take care of. The show’s got to go on.”

Read the full story over at the Providence Journal. 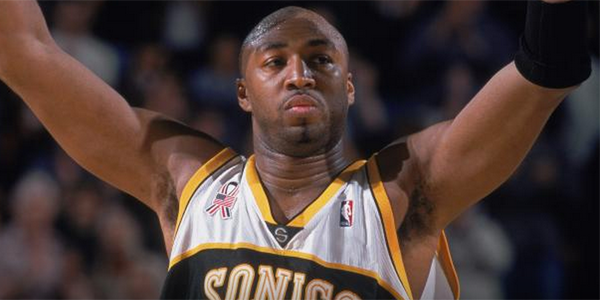