Share on Facebook Share on Twitter
No, thanks. [X]
No, thanks. [X]
Florida State guard Montay Brandon didn’t believe his lying eyes as the Seminoles scored the game-winning basket against rival Florida. He literally had to look at the scoreboard to confirm what he saw.

Teammate Devon Bookert had just badly missed a 3-point attempt in a tie game as the clock wound down, but somehow the ball found its way through the net. The ball took an odd bounce off the rim because it was short and Florida forward Jacob Kurtz accidentally tipped in the miss with 0.4 seconds left to give Florida State a 65-63 win. The victory snapped a Gators’ five-game win streak in the series dating back to 2008.

The fluke play saved the Seminoles after they gave up an alley-oop from Kasey Hill to Dorian Finney-Smith with eight seconds remaining to tie the game at 63.

“That was crazy,” said Brandon, who’s never been involved in an ending like that. “I thought he had a rebound. I guess it just slipped out of his hand. I don’t know how to explain it, but I was just happy.

“At first I was looking around like, did that happen? Then I saw the scoreboard change and I was like, oh man, we’re winning. I started going crazy.”

A pair of free throws by Brandon gave the Seminoles a five-point lead with 49 seconds left in the game. The two possessions seemed to be enough, but Hill knocked down a transition layup, was fouled and made the free throw. Then the alley-oop was set up off an offensive rebound.

“It’s one of those shots that went in that you shake your head about,” Florida State coach Leonard Hamilton said. “I’ve been on the other end of that so many times that I’ll take that and be very happy.”

“That was probably the first time I’ve seen a game end like that,” Hill said. “That was not Jacob Kurtz’s fault at all. That was everybody’s fault. We made some mental errors and that’s what killed us. It wasn’t Jake’s fault at all.”

“I didn’t think it was a very well-played game by both teams,” Florida coach Billy Donovan said. “Both teams played and competed hard, but it wasn’t a very clean game. … There was a lot of mental lapses by both teams.

“We lost on a fluke play, but even if that play didn’t happen, what’s to say they still wouldn’t have won that game in overtime. You don’t know what would have happened.” 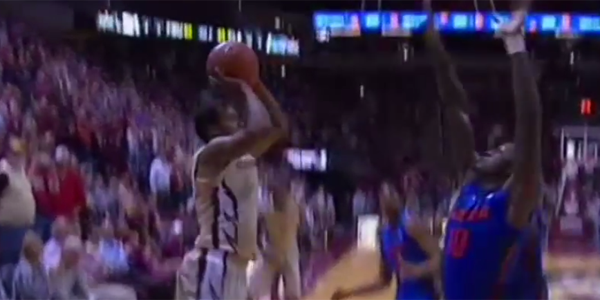