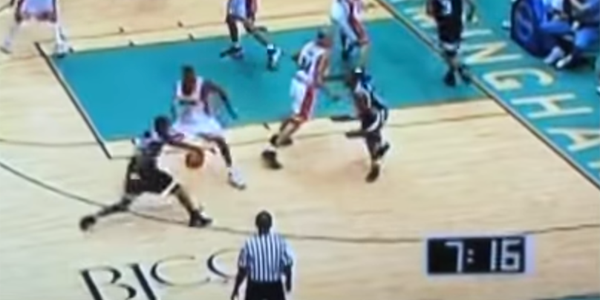 The ‘shammgod’ might just be the sickest move you will see in a basketball game.

The move, popularized by ‘God Shammgod’ after he pulled it out in the 1997 NCAA tournament, has been seen as far back as the 1980’s in Europe. Yugoslavian forward Dejan Bodiroga (drafted by the Kings in ’95 but opted to stay in Europe) was the first player to use it on a regular basis – with it being known as ‘El Latigo’, meaning ‘The Whip’ in Spanish.

Nowadays, it has become a lot more widespread – so we decided to put together a list of our 23 top plays involving the shammgod crossover! Check ’em out:

1) Lamar Odom Does a Shammgod Through Defender’s Legs

Here’s some vintage Lamar Odom for you, as he pulls the shammgod, goes through the defender’s legs and makes the layup!

A lot of people don’t know that Dejan Bodoriga was actually the first person to become known for the use of the shammgod – not God Shammgod. Here he is putting someone in the mix! Check out his full shammgod reel here.

3) Remy Minor with the Dirty Shammgod

Shout out to this young buck, Remy Minor, who pulls out a nasty Shammgod before hitting the three!

Arguably the nastiest shammgod we’ve ever seen, as high schooler Brandon Key pulls out this filth.

5) God Shammgod with the OG Shammgod

This is the shammgod that brought the move to the masses, as God Shammgod brings it out in the NCAA tournament.

God Shammgod does it again.

Manu Ginobili is so known for his use of the shammgod, he has a whole mix dedicated to it.


Who knew Gallinari had it in him? Danilo brings out the shammgod at the NBA’s Las Vegas Summer League, shocking everyone so much the clip has racked up hundreds of thousands of views on YouTube.

CP3 has alsow become well known for his tendency to use the shammgod, but this one might be the nicest of em, as he catches David Lee and knocks down the J.

Here is Tyreke Evans making a defender look silly at The Elite 24 Midnight Scrimmage in 2011!

Kyrie Irving might just have the nastiest handle in the league, and he proves it with this shammgod as he drops Brandon Bass!

12) Uncle Drew Shammgods to the Hoop

No Shammgod compilation would be complete without Uncle Drew doing his thing!

Aquille Carr will forever go down in history for having some of the nastiest handles ever seen in high school, and this shammgod in transition might be one of his nicest moves.

This is without doubt one of the nasties shammgod combo moves we’ve seen, from Tony Wroten at the Seattle Pro-Am.

15) T-Mac Shammgod in China into Pullup


T-Mac has a whole shammgod highlight reel on YouTube but this might just be the nicest of ’em as he shammgods into a J while dropping defender!

Source: Return of The Mac

Vasillis Spanoulis shows his style in Europe, bringing out the shammgod at the Final Fours on a world stage for the lay in! He also has a shammgod reel on Youtube.

Another dope shammgod from high school, this time from Xavier Rathan Mayes, who kills the shammgod before making the sick dish to his big man for the dunk.


Tyson Wheeler uploaded this to YouTube as his claim to fame, catching God Shammgod himself with a shammgod in 1995.

19) Shannon Brown Shammgod on the Break

Shannon Brown, not known for his handle, brings out the shammgod on the break in Phoenix, before getting inside for the layup.


Even Kobe has got in on the act. Granted, it’s just a little one, but nice nonetheless!

21) John Wall Shammgod on Michael Carter-Williams on the Break


Wall brings out the baby shammgod on the break to get past Michael Carter-Williams and make the and-1 layup.

Kyrie Irving brought out this filthy shammgod at the Seattle Pro-Am one summer.

Kaphel Ulett Waul shakes his defender with the shammgod before dishing to Nathan Schall who throws down the monster poster dunk in Manchester in England in 2013.

——
So there are our nastiest shammgods – what do you think, any we’ve missed? Let us know in the comments!