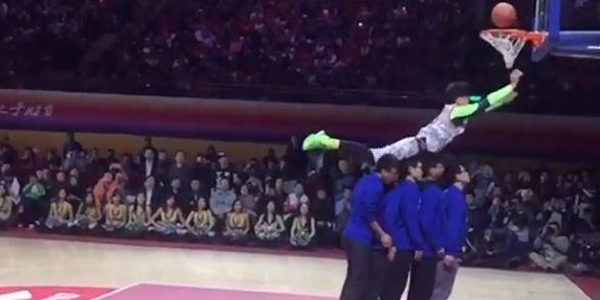 Ahhh, dunk contests. A time to shine, but also, if you’re not Vince Carter, a time to outright embarrass yourself.

Everybody is watching and you’ve spent weeks preparing and then the worst case scenario happens – you fail. Miserably. Like the 14 cases below – take a look at our Worst Dunk Contest Fails of All Time!

You know those times when you put a blindfold on and try to dunk the ball but finish off about 3 feet away from the rim? Yeah, them ones. SMH.

Not sure whether Baron Davis’ or Justin Melton’s was worse. But the fact Baron Davis seems genuinely amazed it didn’t go in is hilarious. The player reactions too lolll.

3) Darrell Armstong Does a Reverse Layup in the Dunk Contest?!

Ok, so maybe he slipped on the approach (?) but Darrell Armstrong actually attempted a lay up in the ’96 NBA Dunk contest lol.

If you’re going to pull a cheerleader out from the crowd, you better make sure you clear her. This guy, Paulius Parachomikas in the 2007 LKL dunk contest, didn’t.

A single cheerleader is one thing, but pulling 5 people from the crowd and failing to get over them? Wow. This one, in the 2015 CBA Dunk Contest is not a good look. lol.

6) Lloyd Hickinson Fails To Dunk Over a Car in Mexico

Lloyd Hickinson tried to go over a car in the Golden Chihuahua All Star Game dunk contest in Mexico, but failed miserably. Luckily, he still won the contest.

7) Trying to Jump Over Ball Rack in Dunk Contest Fail

This kid failed miserably trying to get over the ball rack in his high school contest.

8) Guy Who Gets Leg Stuck in Rim in Dunk Contest

Be careful when pulling yourself up on the rim not to get your foot caught in the net. Like this guy. LOL.

9) Walter Herrmann Strips to His Boxers in Spanish Contest

I mean, this could be classed as a win depending on how you look at it; dude got straight tens. But Walter Herrmann, you really gonna strip off to your boxers in a nationally televised dunk contest in Spain?! LOL.

Larry Hughes obviously thought the Kenny Smith through the legs bounce pass off the backboard dunk was a lot easier than it is. In the 2000 dunk contest, while Vince Carter was making history, Hughes had four attempts at it, failed all of them, before trying a different dunk which he also missed. Oh, also, he missed his opening round attempt, for what is probably the worst outing in NBA Dunk Contest history. lol.

Trying to jump over 4 people lying down in Latvia was a step too far for Shannon Brown who slipped on the takeover – luckily he wasn’t hurt!

I got no issues with girls being in dunk contests – if they’re legit. Lowering the rim to 7 foot and then still throwing down these weak ass dunks? The whole 2011 Earthmover Premier All Star Classic dunk comp was a fail.


Along with Larry Hughes (see above) Chris Anderson also rivals for a terrible NBA dunk contest outing – need 9 attempts on his first dunk!

This poor guy just never stood a chance did he!

—
Anymore that we’ve missed? Let us know in the comments below and don’t forget to share the love with your friends!