Watch the above clip – not a particularly spectacular game winner, but a game winner nonetheless. What made it however, was the backstory – the team, Valley High School, had held the ball for the entire overtime period.

The two schools played a defensive game, and the winning Valley decided to take that to the absolute extreme and prevent their opponents from touching the ball at all for the last four minutes of the game.

It will no doubt spark the debate about whether it’s time to put in a shot clock in High School basketball across the US. Currently just eight state associations to permit its use. Massachusetts, Maryland, Rhode Island, Washington, New York, California, North Dakota and South Dakota utilize the shot clock for either boys or girls or both.

“We got the tip, and were moving the ball around and I looked up and saw there was 2:35 left,” Windhorst said. “I figured, ‘Well, if they’re not going to come out, why would we go shoot quick and give Carius a chance?’

“We’ll just whittle it down, use our timeouts and get the last shot and make sure they can’t have a chance to win it.”

Meanwhile the opposition’s head coach explained it caught them off guard.

“We had a couple options to try to make a play on the ball, but it’s hard to get Scott in a situation where you can trap him,” Hillman said.

“If you’d have told me they were going to hold four minutes, I didn’t see that coming going into the OT. We needed to get the tip.”

The Spartans were disappointed with the result, but not the Tigers’ strategy.

“Obviously, we didn’t like it, but if we had the lead, we’d probably do the same thing,” Pleasant Valley senior post Carter Milam said. “You want to try to win the game.”

The late leaner put Valley into its seventh championship game. The Tigers have been runner-up five times, including their most recent visit in 2014.

“It was kind of weird, because we didn’t go into it thinking we were going to hold the ball for four minutes. It just kind of happened,” Scott said. “Once we realized they were staying back — there’s no shot clock, so we might as well.” 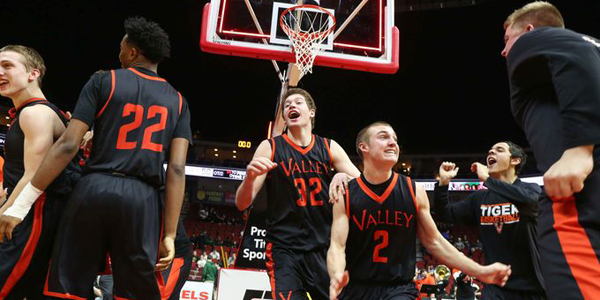 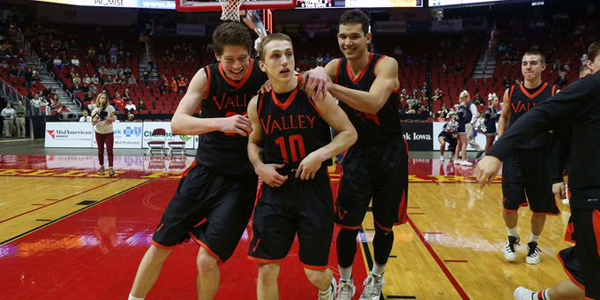 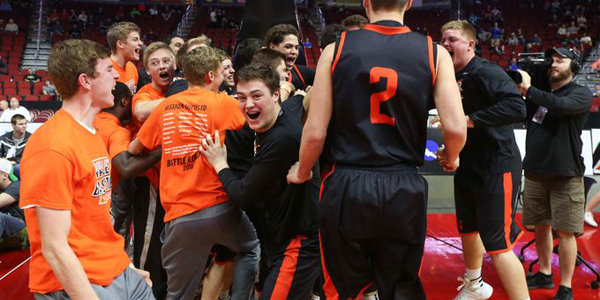