Warning: A non-numeric value encountered in /home/e8vc4iahokqp/public_html/viralhoops.com/wp-content/plugins/eu-cookie-law/class-frontend.php on line 106

What started as a simple challenge from a college basketball coaching staff to its players has become a viral video basketball fans and even those who don’t watch the sport can appreciate.

Colby College men’s basketball coach Damien Strahorn and his assistants took note in film review of a loss early this season of how the players on the opposing team’s bench enthusiastically supported their teammates while players on the Colby bench sat still.

The Colby coaches pointed out the difference to their players and challenged them to take a different approach. Three players for the Division III school in Waterville, ME, did that and more, organizing short comical cheers and skits to do to support their teammates during games. 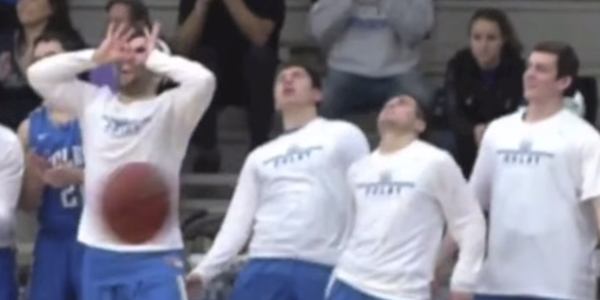 As the season wore on, senior captain Jonathan Kalin and sophomores John Gallego and Michael Loginoff became more and more creative and entertaining.

The celebrations caught the attention of the family of starting point guard Luke Westman. They would record the games from the stands and they began paying more attention to the Mules’ bench. Colby went 14-10 in the 2013-14 season, a seven-game improvement over last season, including a win over Amherst College, which was ranked No. 3 at the time.