You may know John Celestand as an announcer for ESPN Plus and ESPNU covering college basketball games, or a studio analyst on 76ers Post Game Live for Comcast Sportsnet Philadelphia. But what you might not know him for, is this incredible story of Kobe Bryant from his playing days.

Celestand was selected by the Los Angeles Lakers with the No. 30 overall pick of the 1999 NBA Draft and was a member of the Lakers’ 1999–2000 championship team, but his first interaction with Kobe was as early as 2005, when a skinny kid was taking trash to him on a visit to Villanova. 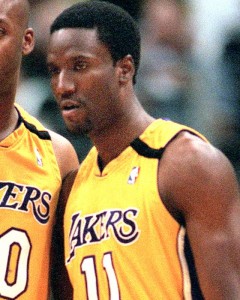 We’ll left Celestand (pictured, right) take over from here – as told on his personal blog.

In the fall of 1996, my roommate at Villanova, Howard Brown, and I shared a laugh. A skinny bald-headed high school kid, who was a star at the school around the corner, sat in our locker room and told us he probably wouldn’t come to Villanova.

The “cocky” kid told us he would probably just skip college altogether. Instead, he would just go straight to the NBA.

We laughed that night back in our dormitory. We took turns asking each other, “Who does this kid think he is? What is he smoking?” We even tuned in the television to laugh at the kid as he gave a lackluster performance in the McDonald’s All-American game later that winter.

That kid was Kobe Bryant and now I wonder what the hell were we laughing at.

One thing is for sure: Kobe Bryant believed he was Superman. He believed he could accomplish anything. This is the basic belief of many successful professional athletes. The great ones, however, seem to have a deeper and profound belief in themselves. A belief that can propel them to higher elevations that other surrounding believers never reach.

I would join the “kid” on the Lakers in 1999 when I was drafted as the No. 30 overall pick by the organization. I had followed Kobe on television for three years prior to joining the team. But TV could not illustrate how Kobe made himself. Only viewing him in person, right there in the practice facility in El Segundo, could a person get an accurate gauge. There was a reason for his greatness. There was a reason for his cockiness. Kobe prepared, he worked, he prepared and he worked again.

The first time I began to understand why he was the best was in the pre-season. In a game against the Wizards, Kobe broke the wrist on his shooting hand. He was always the first person to practice every day, arriving at least an hour and a half early. This would infuriate me because I wanted to be the first person to practice, just as I had always been at Villanova and Piscataway High in New Jersey. To add insult to injury, I lived only 10 minutes from the practice facility — while Kobe was at least 35 minutes away.

I am ashamed to say that I was excited the day after his injury because I knew that there was no way that No. 8 (as former Laker point guard Tyronn Lue called him) would be the first to practice, if he would even be there at all.

As I walked through the training room, I became stricken with fear when I heard a ball bouncing. No, no, it couldn’t be! Yes it could. Kobe was already in a full sweat with a cast on his right arm and dribbling and shooting with his left.

As the next couple of days of practice passed, I would glance over as Phil Jackson was talking and see Kobe on the side going full speed and pulling up with his left. He was a conducting an all-out practice with himself. Lakers trainer Gary Viti, had to come in and tell Kobe to take a rest. But when Viti left, Kobe was at it again.

One day I was shooting on a side basket — on the court that Kobe had made his own practice spot. He challenged me.

I laughed at him. I was actually insulted that he would challenge me, a pro, to a game of horse with his left hand. After he insisted, I figured I would just whip him and prove to him that he wasn’t Superman. He couldn’t do everything.

He made shot after shot after shot. I was beginning to feel more pressure as I got each letter. First H, then O, then R, then S. I couldn’t let this man beat me with a broken shooting hand. My gosh, he was shooting threes with his left. I finally made a deep three and the stars aligned and Kobe missed. I had escaped the most embarrassing moment of my basketball life. When he missed he was infuriated.

When Kobe’s wrist healed and he came back during the regular season, he again proved to me that he believed he could do anything. During his first game back, Kobe drove left and pulled up for a jumper. It was an airball. He shot it with his left. The result didn’t matter. The fact he attempted the shot astounded me. In an NBA game in front of thousands, the man shot a left-handed jumper. He believed it would go in. He really believed.

We both agreed Kobe’s game is no joke and we ain’t laughing no more.