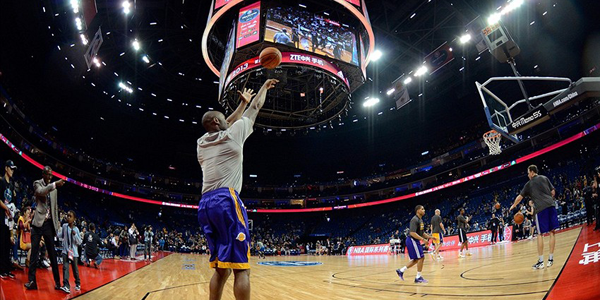 It has long been known that Kobe Bryant is one of the hardest workers in the history of the NBA, and here, in some rare insight, we hear from his fellow players and coaches of his incredible work ethic.

If this doesn’t motivate you to work harder, then nothing will!

1) Carlos Boozer’s Reflections from the 2008 Olympics

“You know what it was for me? And me and him are good friends, but I hadn’t really trained with him — is how hard he works. We saw his dedication to the game. He would get in the gym, lift weights, he would go over to the gym, get shots up before practice, go through the whole practice, and that was his routine every day.

“He’s not great by accident is my point. He puts the work in. And I think what I learned about Kobe is he’s so hungry to be good, he puts the work in. I just think his hunger and his determination is what I was most impressed with.”

Lazenby on why Jordan thinks Bryant deserves being compared to him: “Kobe had done the work. He [Jordan] was very aware and taking in great interest in Kobe Bryant’s great work ethic. Michael Jordan’s work ethic also is legendary. He said Kobe had done that work to deserve the comparison. He says Kobe’s the only one to have done the work.”

3) Jason Kidd’s Impressions from the 2008 Olympics

“Kobe was great. He practices as if it’s Game 7. He wants to prove that he’s the best player in the world every single practice.”

“Me, I’m a freak-of-nature dawg because of my size. LeBron could be a scientific dawg like Kobe, but he’s not, he’s got a lot going on like I did, so that’s preventing him from being one.”

“Kobe, from day one, is just the hardest-working player I’ve ever been around. He just does an unbelievable job. He came in, he worked out before practice and practiced harder than anybody and then worked out afterwards and continued the whole trip. The first trip we are qualifying and then the Olympics themselves.

“He’s just an unbelievable competitor and in practice goes 100 percent every day in practice and that brings everybody else up to that same level. He was a huge part of us being ready in the Olympics to be able to win. Of course, when we needed a big shot, he made a big shot against Spain.”

“I have a lot of respect for his game. He’s one of the hardest workers I’ve ever seen,” Williams said. “He’s just a great competitor. . . . Just seeing how he works every day, it’s inspiring.

“Until you see it up close and personal, you never really know. Any time a guy was scoring on an opposing team, he wanted to guard him. He always wanted the toughest assignment. That’s just his nature.”

Some of the roots of what made Durant such an efficient scoring machine can be traced back to the summer of 2008 when he was trying to make the roster for Beijing and the team was given a day off in Las Vegas.

We’ll let Durant pick up the story from there.

“We had the day off, but they said we could get some shots up if we wanted, so I decided to head over with [Oklahoma City teammate and Team USA hopeful] Jeff Green.

“Kobe [Bryant] was the only guy on the bus, and that spoke volumes to me — he’s the best player in the game, yet he’s always willing to come work on his game, so that kind of motivated me and Jeff,” Durant said. “He went by himself, he got a lot of shots up, and by the time he was done you could see he had gotten better over that hour. Like I said, it was a big inspiration to me and Jeff.”

“The first time I began to understand why he was the best was in the pre-season. In a game against the Wizards, Kobe broke the wrist on his shooting hand. He was always the first person to practice every day, arriving at least an hour and a half early. This would infuriate me because I wanted to be the first person to practice, just as I had always been at Villanova and Piscataway High in New Jersey. To add insult to injury, I lived only 10 minutes from the practice facility — while Kobe was at least 35 minutes away.

“I am ashamed to say that I was excited the day after his injury because I knew that there was no way that No. 8 (as former Laker point guard Tyronn Lue called him) would be the first to practice, if he would even be there at all.

“As I walked through the training room, I became stricken with fear when I heard a ball bouncing. No, no, it couldn’t be! Yes it could. Kobe was already in a full sweat with a cast on his right arm and dribbling and shooting with his left.”

11) Tayshaun Prince Reflections from the 2008 Olympics

“You learn a lot of things from Kobe, just his patience and things like that. Just the ultimate competitor. Stays in the gym all the time. Always wants to get better. Always wants to work. When you go out there and play against him, you have to be ready for war. He’s always moving, he’s always physical, you have to always be alert at any time.”

12) Robert Horry Talks About His Time with Kobe

“I tell people all the time I used to play with Kobe Bryant.

“Kobe Bryant is probably one of the best basketball player you’ll ever see outside of Michael Jordan, Hakeem Olajuwon.

“The thing that makes Kobe so great, is that he’s a hard worker.

“People don’t know that, but he’s always the 1st in the gym, and the last to leave, even though he is the best player in the game right now.”

Caron Butler says he’s grateful he spent a year in Los Angeles as Kobe Bryant’s teammate and work out partner.

“I say that’s the best thing that ever could have happened for me personally for my career,” Butler said. “To play alongside a guy like that, see his preparation, see what it takes to get to that level, that’s why I was able to be so good in Washington because I took everything I learned from him under his wing.”

“Work ethic,” Butler said. “He comes to the gym 6:30, 7 in the morning, gets shots every day, a rhythm. Afterward hits the weight room, works out in the summer, studying film, critiquing guys, watching their tendencies, picking things up … Just studying the game with him taught me a lot.”

“Kobe’s just an inspiration to be around – on and off the court. His leadership style is one of modeling — no one works harder than him. No one practices harder.

“All you have to do is watch him, and do what he does to prepare and maintain his game — I couldn’t help but get better as I matured as a player around him — who couldn’t?

“Kobe is simply the best player on the planet! LeBron is trying to get there with his body, his game, his style and his arsenal — and he will. But Kobe will still have been there first.”

“You know it was so funny, my first experience when I was out in LA, me and Kwame Brown got traded to the Lakers [in Summer of 2005]. We were playing a pick-up game before the season started, we were playing 3-on-3, and it was game point.

“Kobe had the ball and it came off, Kwame knocked the ball away from him.

“Again [this was] a pick-up game, September, nothing on the line. And the ball rolled to half court.

“Kobe then ran to half-court, dived under Kwame’s legs with the ball for about 10 feet, picked the ball up, came back down, made some incredible move, then hit the game-winning shot to end the pick-up game.

“I walked off the court, and I called my mom, and I said, “I think I’ve just seen the second best player ever [behind Jordan].”

“But then around him, you understand that nothing he does is by accident, that all this is a result of hours and hours and hours of preparation. So that when he gets into a situation in a game, in a playoffs game, in a Finals game, his confidence comes from his prepration.

“He once told me at a halftime of a game, he was struggling, I think we were playing Seattle [Sonics] and he was struggling, and I asked him, “How do you feel?” and he said, “I feel great! The second half… the second half. Hey Prof, I work too hard. These shots HAVE to fall eventually because I’ve worked too hard, I’ve shot too many shots.”

“So his belief in himself… when we look at it and see it as arrogance, some people see as may have too much confidence. It’s really just a result of how hard he works, of how much preparation time he puts in his game. That once he steps on the court, he really believes that he will be successful. And that’s what I think I took away from him more than anything else, it’s that your belief in yourself has to come from your confidence and your preparation.

“What’s most impressive about this young man are his desire, his work ethic, his competitive nature. [Bryant] comes to the arena at 4:30, before anybody is here, and works on his game alone. He has incredible skills and the desire to be a great player.

“We’re extremely happy with Kobe’s development – and we think he’s going to keep improving. You haven’t seen the best of Kobe yet.”

Roughly one week into training camp Bryant called Gaffney down to the Lakers’ training facilities in El Segundo.

“We’re gonna start playing one-on-one,” Bryant told Gaffney, according to the forward. “I heard you’re a defensive lockdown player. So, lock me down.”

“Obviously easier said than done,” Gaffney said with a laugh. “But for about three weeks in a row, I was forced to show up hours before practice to play one-on-one against Kobe.”

Bryant would invent various sets of rules where he could only dribble and score with his weak hand; some days he could only score inside the paint, others only from outside.

“Oh, and I never got to play offense,” Gaffney said.

Bryant’s work ethic is off the charts. It’s what separates him from other athletes who strive to become great.

In Europe, Gaffney is known for his hard work and commitment to playing defense. He collects floor burns and is the first guy in the gym and the last one to leave.

“There was no difference with the Lakers except no matter how early I showed up for practice, it wasn’t early enough: Kobe was on the court with three trainers doused in sweat,” Gaffney said.

“No one would have any idea that he’s been in the gym working for three-to-four hours,” Gaffney said.