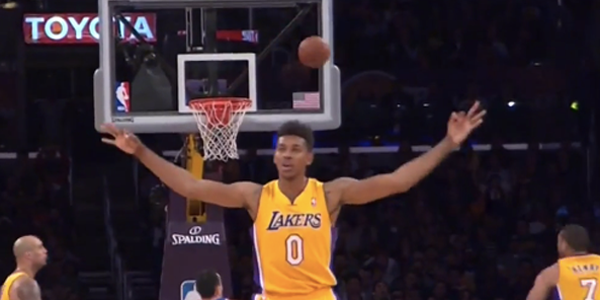 There is perhaps nothing more embarrassing than celebrating something you believe is a sure thing, only to have it taken away.

Check them out and make sure you share the love with your friends!

Kent Bazemore is known for his bench celebrations, but this one was far too premature.

Jennings thought it was a sure thing, as did the bench…but as you can see, it was far from it.

Nothing like giving the coach a shower and almost knocking him out in the process.

Nate Robinson has always been known to be excitable, and this time he got carried away.

A little celebration fail from the WNBA now, as Candace Parker inadvertently causes her teammate to have to get medical help with a deep cut.

Oh wow. Pledger receives the rebound and puts up the potential game winner, fist pumps before it has gone in only to watch it bounce off the rim.

7) This is Why You NEVER Celebrate Too Early

Cibona and Partizan both learnt their lesson in this one – it ain’t over until it’s over!

Kobe Bryant is known for having the most similar game to Michael Jordan, but I’m sure MJ never fell over like this.

9) Austin Daye Gets Chest Bumped to the Ground

This is what happens when you make the NBA at 175lbs.

Jason Terry still didn’t admit after this that he was confused about the score, he said he was celebrating that the game went to overtime and the opposition didn’t win.

If you’re going to chest bump, make sure you both go in with the same amount of force, or this will happen.

Oh, Swaggy P. Very little swag on this one, and a whole lot of fail.

You think Rick Pitino would be chilled after just winning an NCAA championship, but instead is clearly still uptight as he gets shook when the fireworks and confetti goes off!

If celebrating a missed dunk isn’t bad enough, Von Wafer makes it even worse by causing his teammate to travel when he re-enters the court.

Never let cheerleader’s on the court in a close game that is going down to the wire! Lucky for Louisville, they still got the W, despite this cheerleader getting a T in the final moments of the game.

Two brothers punked their other brother at half time of a Utah Jazz game to make him think he won a million dollars. His celebration is just awesome.

You think the NBA wouldn’t be tight about the trophy’s they get their league stars, but judging by how easily this one fell apart, maybe not.

Iowa State coach Fred Hoiberg did a little dancing after the Cyclones beat North Carolina in the 2014 NCAA Tournament, and later apologised to his family.

Mark Madesen, more famous for his dancing then he is for his game.

The greatest basketball prank of all time.